Normal vamps wear yellow-ish robes that have odd insignias on them. Their faces look mutilated, revealing bone, and they have piercing yellow eyes. This version attacks by throwing shurikens at you from a distance. They can throw several at a time, and they tend to stick to far-off places. However, most of them that DO approach you closely can transform upon death into a giant ogre-like being that wears silver armor and are covered with blood. With this form, its best to freeze-shatter them. They appear exclusively to the Catacombs level.

The Big Vamp will not throw 3 daggers like the Normal Vampire, instead he will pick meat from his body and throw it at you, this may explain the huge splat of blood on his chest.

The Big Vamp's model looks way different from the Normal Vampire's one, instead the Vamp Master one looks like the small one. This might have been done to avoid the confusion about Forest Vamp not being able to die at light but Vamp Master being able to.

Forest Vamp is an exact replica of the Big Vamp with the only difference is his reduced health of 150 instead of 500 and that they are already in this form once they spawn.

The Forest Vamp would have been added for the fact that he is weaker, so that the groups of Forest Vamp can be killed more easily.

The fact that the Forest level is happening outside may result in exposing the Forest Vamp to light resulting in him being weaker.

The Barrel Vamp is an enemy which can be found in the Catacombs level.

It is the most dangerous and harmful enemy in the Catacombs level, he uses the same model as the Big Vampire but only smaller, he holds a barrel which has the string to it already lit. The Barrel Vamp will drop his barrel when he is close enough to the player causing a explosion which will kill him and do a massive amount of damage to the player. On higher difficulty it can instantly kill the player.

Despite the fact that the barrel's string is lit, it will never explode by itself like the Suicide Vamp.

The Suicide Vamp is an exact replica of the Barrel Vampire, with the only exception that he has only 1 HP and he will die if 7 seconds have passed. They will only appear in a group of 2 in the Catacombs level near the brick wall which they will ambush after you have killed every single monster. They will spawn only if you get close enough to the brick wall.

The Suicide Vamp may serve as an introduction to the Barrel Vampire so that the player will get used to their behavior and pattern. Also the suicide after 7 seconds may tell the player that they will explode on impact.

The Suicide Vamp's explosion will deal way less damage than the Barrel Vamp. This was done so that the player will not die to an enemy that they had never meet before.

Vamp Master is the last enemy encountered at the end of the Catacombs. It looks like a giant version of the Small Vamp. There are two methods to kill this type of vampire: For the first one, shoot out the skylight over the altar and sit at the end. He'll make his way to you, and before he can knock you into the flames , leap away to a small platform to the right. If you did it right, he'll die immediately and the level portal opens. If not, keep trying. He'll die eventually. Also, Vamp Master can be killed instantly in Demon morph.

The Vamp Max is a giant Vamp encountered in the Cathedral midway through the level. It looks like a massive version of the Big Vamps. It attacks by throwing anything convenient at you, like rocks or nearby Psychonuns. It can also grab pillars in the room and literally shake the room for more debris to fall.

Painkiller: Heaven's got a Hitman[edit source]

The early stages of Normal Vampires.

The Small Vampire version of the First Look Build version. 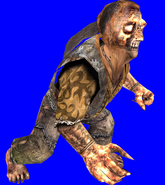 The image of a Big Vampire compared to a Forest Vampire. 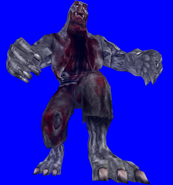 The image of a Barrel Vamp/Suicide Vamp.

Small Vamp in the 2003 teaser image.
Add a photo to this gallery

Retrieved from "https://painkiller.fandom.com/wiki/Vamp?oldid=16547"
Community content is available under CC-BY-SA unless otherwise noted.