Lucifer is the final boss of Painkiller. He is the Ruler of Hell and former angel. He used to be one of God's angels, but when he created the first humans, Lucifer has grown jealous and eventually was banished from Heaven. He seeks revenge on mankind and wants to eventually conquer Heaven by conducting the Final War between angels and demons. Even though, he believed his armies to be too weak and outnumbered to start the War, which caused many of his generals, including Alastor, to turn against him.

After Alastor was killed by Daniel (you), Asmodeus appeared and revealed himself as Lucifer himself and then he took Eve to Hell with him (he seemed to have feelings for her). He appears as a giant bipedal winged demon with a sword. The only way you can kill him is through Demon Morph. You must use the rocks he sends into the battleground to bounce them onto him and cause him some damage. When Lucifer is charging an attack with his sword, Demon-Morph the sword, to kill him. He is the most powerful demon in the game. In the level Hell, you must collect souls from the invisible demons and once you have enough, 66 souls, he will appear. He lasts for a few minutes and then you must get back to collecting another 66 souls, until you defeat Lucifer.

Lucifer is the lord of Hell, who uses Purgatory to advance his troops for the Final War.

Daniel was given a task to kill four generals. With the aid of Eve, he kills Lucifer's armies and eventually his Generals. They meet Asmodeus, a demon that saved Daniel's life (later it is revealed that he's actually Lucifer).

After killing Alastor, he sees Asmodeus again. Asmodeus sees that Alastor is dead and is awestruck at Daniel's power. After looking at Alastor's corpse, Asmodeus transforms into Lucifer. Lucifer tells Daniel that he didn't want to reveal himself and, eventually, he returns back to Hell (this only happens in Daydream, Insomnia and Nightmare difficulties).

Lucifer Sketches that depicts him in a totally different way than it is in the game. 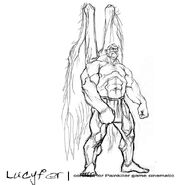 Lucifer's final model seen in the cinematic.
Add a photo to this gallery

Eventually, Daniel decides to save Eve. Samael tells him where Hell's gates are and also tells him there's no way back if he wants to quit. He must kill Lucifer to be able to exit Hell.

When you finally enter Hell, you must kill 66 ghost monsters in order to morph into demon and teleport to Lucifer's lair. There, he will launch meteors at you. Shoot the meteors in Lucifer's direction to damage him. After he screams, he will throw his sword at you. Within the next three seconds, shoot the sword back at him to finish him off. Defeating him will open a Blue Pentagram at the end of the level.

Battle Out Of Hell[edit | edit source]

Alastor takes Lucifer's place in Battle Out Of Hell.

Retrieved from "https://painkiller.fandom.com/wiki/Lucifer?oldid=16808"
Community content is available under CC-BY-SA unless otherwise noted.